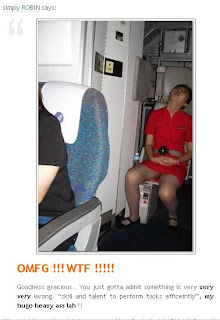 JELI, June 3 (Bernama) -- Low-cost carrier AirAsia has agreed in principle to give special fares to students, Higher Education Minister Datuk Mustapa Mohamed said today.He said the special fares would benefit students from the peninsular who were studying at higher learning institutions (IPTs) in Sabah and Sarawak and students from Sabah and Sarawak at the IPTs in the peninsular.The final decision had yet to be announced, he told reporters after opening a promotional programme by Universiti Malaysia Sabah (UMS) here today.Mustapa said the Cabinet had asked AirAsia and Malaysia Airlines (MAS) to consider giving students special fares so that those from poor families would not feel the burden every time they return home during semester holidays and to celebrate festivals with their families."The ministry hopes the discussions with Air Asia and MAS can be concluded soon," he added.-- BERNAMA
Publié par L I D A H B E N A R à 00:54 Aucun commentaire:

"Pak Aziz Sattar" as people addressed him, received a state accolade at the age of 82. He may not be that lucky; God knows how long he would enjoy it.

But better than never, you go, Pak Aziz!

The only act that he stared but I wish he would not do it, was as a transsexual who was living on streets of KL. The way he was dressed in Baju Kurung with lipstick shimmering on his lips is really not suitable for a well-known icon.

Maybe he tried to get easy money, but that was not the excuse! 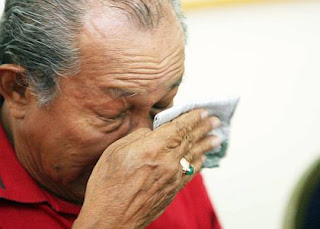 Accolade For Veteran Actor Aziz Satar
By Syed Azwan Syed Ali
KUALA LUMPUR, June 2 (Bernama) -- Aziz Satar was resplendent in black "baju Melayu" (Malay attire), complete with headgear, looking almost like the Malay warrior character "Hang Lekiu" he had played in the 1956 movie "Hang Tuah".But when he stepped forward this time, he did not have to wait for the film director's signal to action. It was for real.The 82-year-old veteran actor, whose real name is Abdol Azez Satta, took the few steps towards the Yang di-Pertuan Agong, Tuanku Mizan Zainal Abidin, to receive the Panglima Jasa Negara (PJN) award that carries the title "Datuk" at the Istana Negara here today.It was a recognition for the versatile actor's performance over the last 50 years that had kept cinema goers and, in recent years, television viewers entertained."I am grateful and thank the government for according me this honour. This is the highest award bestowed on me in my whole life," Aziz told Bernama after the investiture ceremony.He was one of the 42 people who were accorded honours at the ceremony. The Yang di-Pertuan Agong had conferred awards, decorations and medals on 2,309 people in conjunction with his birthday this year.Aziz, in a voice choking with emotion, said the award recognised his contribution to the local entertainment scene since the start of his acting career in his first film "Putus Harapan" in 1953.Arguably, Aziz is best known for his acting along with the highly acclaimed actor and director, the late Tan Sri P.Ramlee, and S. Shamsudin in the film "Pendekar Bujang Lapok".Another of his popular films is the 1961 "Ali Baba Bujang Lapok" which local TV stations screen even today.Aziz, who was born on Aug 8 1925 in Surabaya, Indonesia, has acted in more than 100 films and dramas.When asked how he felt when he learned he was to be awarded the "Datuk" title, Aziz, who is fondly called Uncle Aziz by entertainment reporters, said it seemed like a dream."We work not to seek fame; art is an asset. The most important thing is to think of society; then society will remember us," said Aziz, who was accompanied by his wife, Hashimah Delan, 48.-- BERNAMA
Publié par L I D A H B E N A R à 03:32 1 commentaire: